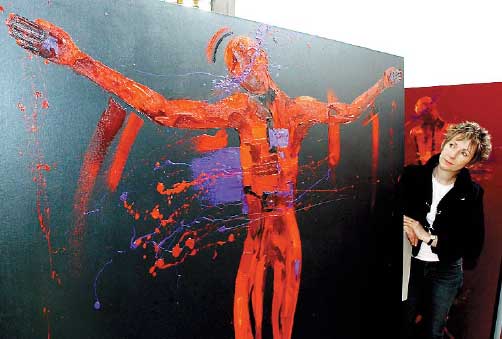 Penny Warden is a British artist known worldwide for her numerous significant public commissions and unique,expressive style.Her work has appeared in many high-profile locations and galleries across London and the UK.

Following several commissions for churches and chapels in the UK and abroad, Penny was commissioned in 2005 for “a major project of national significance” in Blackburn Cathedral, Lancashire, England. This consists of the permanent display of fifteen 6ft oil paintings and is “probably the most adventurous of its kind in any English cathedral.” With accolades from Desmond Tutu – “wonderfully creative” – and viewed by the US Secretary of State this “extraordinary exhibition will be seen by generations to come.” Penny has been interviewed several times on BBC radio. Her work has featured in a number of national and international magazines and publications. Her work has also been used in a significant theological teaching resource by Cambridge University and she has exhibited and spoken about her work at Oxford University. She has been a speaker at numerous conferences and has been part of several consultation groups at Windsor Castle on ‘Human Creativity in the Arts’. Her public commissions can be seen on the BBC website.

Further information about Penny’s work can be found at: